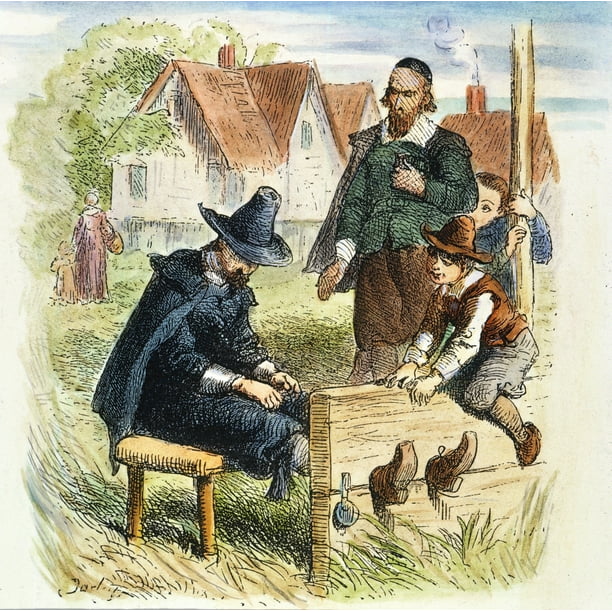 New England colonists living in Puritan-established settlements in the seventeenth century dealt with many of the same realities. During the seventeenth century in New England, colonial settlements saw a rapid expansion from roughly onward. The common assumption that Puritan society was homogeneous holds some truth, but this was not the case in matters of wealth. As communities became more established, people naturally accumulated more material possessions, and those differed in quality from family to family. This makes sense, as little physical money circulated in the early colonies, making tangible objects both proof of wealth and status. One example of this early disparity comes from a recorded inventory from of one William Pontus whose land, house, and furnishings were valued at thirteen pounds.

However, the actual function of social norms outweighed wealth when it came to personal roles and interactions. Puritan society was overwhelmingly male dominated, which was reflected in just about every area of public life. The role of religion was also divided by gender, since nearly every colonist in New England was Christian in some form. Yet in this area, women were also seen as lesser to God than men were. Men were inferior to God and women were inferior to men, so went the logic of social hierarchy. Private life, if it can truly be considered private in the context of Puritan norms, was much different than public life. In a frontier society like early New England, communities were centralized organizations with strict social norms that were upheld consistently, making privacy for sexual and economic matters basically non-existent.

The essential unit of a home was the nuclear family. From marriage to death, assuming no premature occurrence of the latter, it was critical to the survival of a family group that wife, husband, and children live together. Married women in these settings typically underwent a time of about twenty years in which they reared children in addition to the obligations of daily work. The work of a married Puritan woman was centered around domestic settings, and often was very laborious, especially in early New England.

In practice, a wife and mother would be responsible for all the housework, cooking, and cleaning. But women would also trade food commodities in addition to helping each other with birth as midwives or companions. When personal disputes between members of Puritan communities occurred, there was a chance that the disagreement, if it proved serious enough, would be brought to court by one of the involved parties. Since women were excluded from court, but not the law, they were obligated to attend trials in the case that they also broke common law.

In Northampton , Massachusetts, in , the town's court records include a dispute between Maria Drew and Joan Butler. Whatever Joan Butler may have exactly said about Maria Drew's character, she was found guilty and had to apologize and pay a small fine to Drew. But the sentence she received was different than in other disputes. The comparison of these two altercations suggests a young society that placed a great deal of emphasis on order and continuity. Women were particularly adept at using societal roles to their favor. The lack of privacy in any given community made personal information valuable knowledge.

Living in England during the early seventeenth century, they were very critical of pre-marital sex. Pre-marital sex with intent to marry was allowed, and even when a woman was pregnant out of wedlock it was acceptable if the same man was later married to her. Marriage was very important as it contributed to overall themes of social stability and procreation. Prior to the period of colonization , Native American women lived much in the same way they had within their respective tribes for centuries. Similar to the society of colonial New England, indigenous women were ascribed specific roles in their communities. They were responsible for growing and cultivating crops, most notably maize , where it was common for women to claim and use land that her mother had left her.

Their work in organizing food sources accounted for up to 75 percent of the average person's annual diet. In contrast to the living practices of New England colonists, it would not have been uncommon to see more elastic relationships in Native society. In the case of polygamy , it was often true that men with higher political standing in the tribe would be the central demographic who took multiple wives. This practice also had an added diplomatic incentive caused by the need to unite two tribes, so one tribal leader, or sachem , could marry his son to another sachem's daughter, thus furthering the union between the two tribes.

In some cases, a sachem might take multiple wives who were higher-ranking members of other tribes, which reinforced the common practice of confederation building between neighboring tribes. These broader groups were constantly in flux and challenging one another for local dominance. For example, of the Nipmuck confederation located in Eastern Massachusetts, were the Pocasset , one of many tribes in the area, whose lands reached down to northern Rhode Island. When the Europeans arrived, their leader, Sagamore Conbitant , was distrustful of the settler's intentions, and his early feeling later proved to be right. After he died, his daughter Weetamoo succeeded him as leader. She was treated as an outcast for the rest of her life.

Many real-life Puritan women who were convicted of adultery suffered far worse fates than Hester Prynne. The most commonly prosecuted crimes in New England during the Puritan area were sex crimes, according to Gettysburg College. Any sexual activity besides that of a husband and wife was considered criminal behavior, and for adultery, the punishment was usually a whipping and a fine. That was the case for Anne Linceford, who in confessed to committing adultery and was punished by "an immediate severe whipping at the public post in Plymouth [and] a second whipping at the public post in Yarmouth [where the act was committed]," according to "Sexual Misconduct in Plymouth Colony. In Mary Mendame was found guilty of committing adultery with an Indian man; she was whipped at a cart's tail, which meant she received a whipping while the cart was being drawn through town.

Also, men could divorce their wives for committing adultery. For women, divorce resulted in severe financial loss and often losing custody of the children. A Puritan woman could also pay the ultimate price for adultery. The Massachusetts Bay General Court declared adultery a capital crime in , meaning it was a crime punishable by death. Mary Latham was executed for adultery, according to EyewitnessToHistory. Mary was convicted for committing adultery with one man and then confessed to having sex with 12 others.

She went willingly to her execution, viewing it as a fair punishment for her sins. While men were also punished for this crime, adultery was considered a more serious offense for women, who were often viewed as temptresses. In the case of Mary Mendame, her lover was "only" whipped at the post, a lesser punishment than the whipping she received at the cart's tail, because the judges said she had enticed him. Married men who had sex with a single woman were charged with fornication, while married women who had sex with a single man were charged with the more serious crime of adultery.